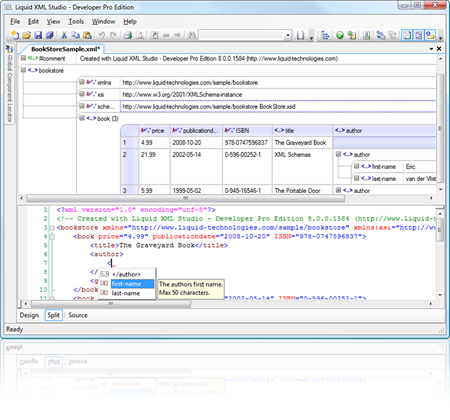 An Introduction to XML

This tutorial answers some basic questions when starting to author your first XML Document.

Whenever there is a need to store complex data, whether it is for passing between systems or storing in a file, the data must be marked up in some way. When it is read back in, it needs to be possible to tell were one record ends and another begins, and which record is contained within another. It was this gap that XML filled.

Whenever there is a need to store complex data, whether it is for passing between systems or storing in a file, the data must be marked up in some way. When it is read back in, it needs to be possible to tell were one record ends and another begins, and which record is contained within another. It was this gap that XML filled.

Prior to XML, developers would produce their own proprietary formats for storing data, with varying levels of success. It's not difficult to conceive of your own system for representing data, but you would also have to write your own custom parser and serializer which may be a complex and error prone task. XML provides a general mechanism for marking up and representing data. As XML is now a wide spread standard, various other tools and technologies are available on most platforms. Using XML will make it possible for you to take advantage of may other XML aware technologies such as XPATH, DTD, XSLT, XSD, XQUERY, and XML Data Binding.

One complaint about XML is that its verbose, and consumes to much space. These days disk space is cheap, and its typically better to have readable data, however there are a few occasions were this is a concern and these are typically addressed using an XML compression technology such as Fast Infoset.

In the example "book" and "title" are elements, and "isbn" is an attribute. The first line is the XML header which defines the character encoding.

Well formed means that all the tags match up. In the example above we opened a "book" element on line 1, and closed it on line 3. Without line 3, the "book" element is not closed, and thus the document is not well formed. Also an attribute must have a closing quote (note the standard allows either single or double quotes to be using for attributes, as long as they are the same at the start and the end of the attribute, i.e. isbn="...." or isbn='....' but no isbn="....'

If the textual data within and element needs to contain a < or > character, then this must be escaped in order to prevent it being confused with an element marker. This is done by replacing it with the literal < or > respectively. This introduces a problem when trying to use the & character, so this is escaped using the & literal. Similarly in an attribute, the quote " character must be escaped using &quot; and ' using &apos;

The first line of an XML Schema is the XML header. This has an optional "encoding" field which describes how the rest of the document should be interpreted (i.e. how to map the data in the file into characters). The standard formats when dealing with international characters are utf-8 and utf-16, character encoding is a whole separate topic, but if you are using an XML Editor (like Liquid Studio, then this is all taken care of automatically).

A DOM parser is an XML parser that reads XML data and stores it in a set of objects, these objects can then be examined and the data extracted from them. The structure of the DOM objects is standardized by the W3C, so the code for reading XML is more or less standard across multiple platforms.

One of the drawbacks of a DOM parser is that the whole XML document has to be read into its object form (and thus into system memory) meaning it is not possible to deal with very large XML files.

DOM parsers exist for all the main platforms and languages, and are typically built into the platforms core framework.

A SAX parser is more primitive XML reader. For every entity it reads in the XML data, it fires an event (or callback) which the consuming application must deal with or ignore. This basic interface makes it possible to cope with arbitrarily large XML files, as the consuming application need only store its current state, discarding information that has already been read, when it's no longer needed. It does however complicate the handling of the data, as the application must keep track of its state (i.e. position in the XML document).

Typically this technique is combined with a DOM parser. The application keeps track of its position in the XML until it comes across a chunk of data it needs to deal with, it then constructs a DOM tree based on a small section of the whole XML document, processes the DOM tree and discards it before moving on.

This mechanism makes it much easier for developers to work with XML data, as they are dealing with strongly typed objects (i.e. they have names and properties that reflect the elements and attributes in the XML data).

This technique must also read the entire XML Document into memory (as with DOM), but this restriction can be worked around, see Liquid XML Data Binding - dealing with large files.

There are a number of tools for XML Data Binding, Liquid Studio provides a solution that generates classes for C#, C++, Java, VB.Net & Visual Basic.

An XML Schema formally specifies the structure of an XML document. This has a number of uses: 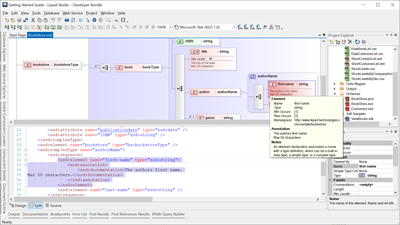 There are a number of mechanisms for describing an XML Schema.