What is XML Data Binding?

XML Data Binding enables you to load XML Documents into a strongly typed object model within your source code.

Liquid XML Data Binder creates simple, intuitive code from your XML Schema. The generated code library contains strongly typed classes, collections, and enumerations to create an intuitive custom API to code against. This massively reduces your coding time and allows you to concentrate on writing your Business logic code.

For example, if your schema has a 'Person' element with a 'DateOfBirth' attribute, then a class called Person will be generated, which will have a property called DateOfBirth. Making coding against the API nice and easy.

The code generator includes a 'Schema to Object Mapping' tool which allows you to alter how class, property and variable names appear in the generated source code to fit your coding standards.

The generated output may also be modified within special 'Hand Coded Blocks', changes inside these blocks are persisted when the library is re-generated, allowing the library to be customised to fit the projects needs. 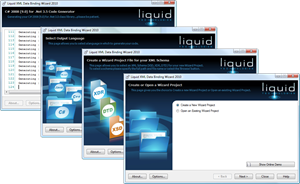 Once you have created a project file using the Wizard, you can then run this from the command line as part of your automated build process.

The library is platform neutral. The product ships with cross platform C++ libraries for 32 bit and 64 bit Windows and Linux, and is also successfully being used on various UNIX platforms, Solaris, Forte, HP-UX, embedded systems and other more obscure platforms using the C++ Runtime Source Code.

Compiles to a single jar using a provided ANT build script. The resulting code can be used on java.

Allows COM Objects to be created, which can then be used from any COM compliant environment such as Delphi, Business Objects, and ASP.

WCF Web Services binding code (C# and Visual Basic .Net) can be generated from a WSDL file or running Web Service, and the Web Client Interface may also be generated.

A full set of HTML documentation can be generated describing the API for your source code, making getting to grips with the structure of your new library simple. This means your team will no longer have to spend hours referencing the XSD schema documents (some of which are huge for example, xCBL is almost 2Mb of schema). Instead developers can simply reference the hyper linked help generated specifically for your schema.

Liquid XML supports an unprecedented quantity of the XSD standard, elements, complex and simple Types, meaning it will process complex XML schema that lesser products will not.

Industry standard schema that are used as Liquid XML test cases include:

Try for yourself with any industry standard XSD - XML Standards Library.

You pay for the development licences only, the compiled code library and associated Liquid Runtime library can be distributed to your customers royalty free as part of your product (see Licence Guide for full details).

This video tutorial shows you how to generate strongly typed API source code from your XSD using the Liquid XML Data Binder.

Try all the features of Liquid Studio Free Trial